Today I am finally getting round to typing up my Heartstopper Volume One Review. As of Monday, the UK is officially on lockdown. I will try to get more posts up now that I will have more spare time, but I am also trying to keep sane during this so please bare with me. I hope everyone is staying safe and staying inside.

Heartstopper Volume One contain chapter one (Meet) and two (Crush) of Heatstopper. We are first introduced to Charlie who is gay and was bullied a lot when the rest of the school found out. 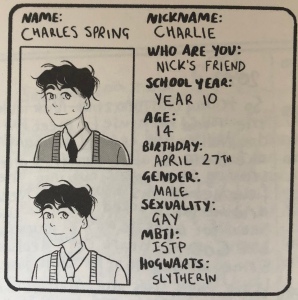 Charlie is the sweetest character. I found myself being protective of him when any one started being mean to him and when he would sneak off with Ben (a guy who had a girlfriend, but would use Charlie for makeout sessions). I think the way the Charlie and Ben situation was written, made my heartbreak a little bit everytime Ben would use Charlie or would tell Charlie how ‘useless’ he is.

We are then introduced to Nick who is in the year above Charlie, but they are in the same form group. Their relationship begins as a friendship that is just awkward and cute and it gave me very realistic, secondary school relationship vibes which I really enjoyed.

Nick gets Charlie onto the rugby team, where we really start to see their relationship develop as well as how the other team members react to Nick and Charlie getting closer. It is a lot of throwaway, but hurtful, comments, which again feels authentic. Oseman is really good at tackling stereotypes. Quite early on in the book she tackles the implication that being gay means you cannot play sports well, having characters respond ‘mate, I don’t actually think being gay makes you bad at sports’, when presented with criticism. The language used in the speach of the characters feels very life like and I appreciate that, especially as there is obviously a lot of dialogue within a graphic novel.

Oseman also shows issues such as a character trying to force another character to kiss them when they don’t want to be kissed. I think Oseman did this in a really good way, I don’t think it was triggering and I think the right people were highlighted to be in the wrong. There was no grey area.

The issue of bullying starts to be shown more in depth in chapter two. I really enjoyed the little snippets of flashbacks throughout, I think it really helped show the severity of the bullying and it wasn’t something that was just presented and not explored.

I gave this graphic novel 5/5 stars.

If you’re looking for a cute and feel good read right now, I highly suggest Heartstopper. It is a quick read but so enjoyable.

What are your favourite feel good reads? I could readlly use the suggestions.

6 thoughts on “Review: Heartstopper Volume One”

Q: what book has recently surprised you?
My bookshelves aren’t in the easiest position to photograph as they were in my old house but I have rainbow shelves again! I missed having colourful shelves. I still don’t understand why the majority of them are blue but oh well😂
I’m out a reading slump!!!!!!!!!!
Q: what was the last book that you could not put down?
March Wrap Up!
Bad Habits by Flynn Meaney follows Alex who is trying to get herself expelled from her Catholic boarding school, but all of her plans have failed so far. She is the founder of the school’s feminist club, and she convinces the club to help her put on a production of The Vagina Monologues.